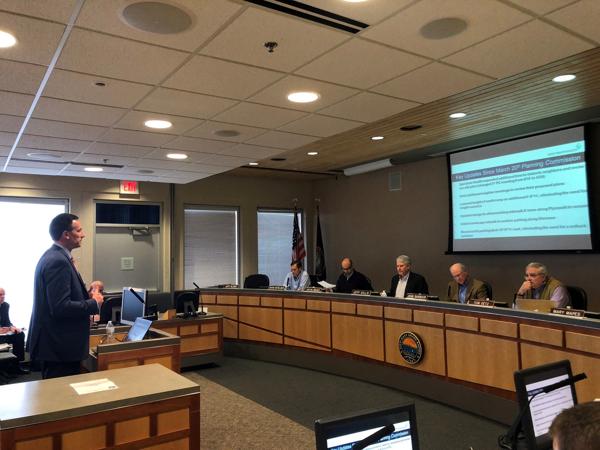 EAST GRAND RAPIDS -- The East Grand Rapids Planning Commission has approved Spectrum's Health latest revised plans for changes at Blodgett Hospital, but the approval came with a list of conditions.

Meanwhile, residents who have opposed the plans, particularly plans for a parking ramp, said they will continue their fight with the City Commission, which must still approve variance requests for the Bldogett project.

The list of conditions was developed by Planner Paul LeBlanc, of PLB Planning Group, who the city has been working with since Spectrum first presented plans in February. His conditions include the following:

Additionally, Commissioner Mary Mapes asked for two added conditions -- that landscaping be maintained and monitored, and that signs and gas lamps similar to those in the city's business district be added.

During the Planning Commission meeting on Tuesday, April 24, Rick Redetzke, senior vice president for facilities and real estate for Spectrum, once again presented the company's plans for the hospital, located at 1840 Wealthy St. SE.

Prior to the meeting, Spectrum met with the residents in the outlying area on March 22 and 29 to garner feedback and to view plans that had been drawn up by a firm the neighbors had hired.

"At the end of the day, our submittal that we have in front of you has considered all of that and looked even deeper into options," Spectrum's Redetzke said.

Despite the second round of revisions, the neighbors were still opposed to Spectrum's plans. Specifically, they had continued reservations about the size of the parking structure.

"Ask people why they move to East Grand Rapids, why they came back to raise their families and what is the number one reason? It's community... No one is going to say I moved there because Blodgett campus is in the center of it all." Astrauskas said.

Several Spectrum employees, some of whom work at the Blodgett campus, voiced their support of the project.

"It's time for that parking space to be replaced and for us to meet the needs of our patients," employee Nardos Osterhart said.

Julie Wolowitz, vice president of operations and executive in charge of Blodgett Hospital, added that the project is time-sensitive, as the current parking structure is at the end of its life.

After Spectrum's presentation and public comment, several commissioners said they felt that Spectrum's most recent proposal was a major improvement from its first in February.

"I think we're ending up with a better proposal than we started with by a long shot," Commissioner Tom Getz said.

Commissioners added that they appreciate the work from Spectrum and all the input from the neighbors, but they will never reach a point of total agreement for both parties.

"We're never going to please everybody through these projects," Commissioner Jeff Dills said.

Spectrum Health will go before the City Commission at a later date to seek the variance requests.