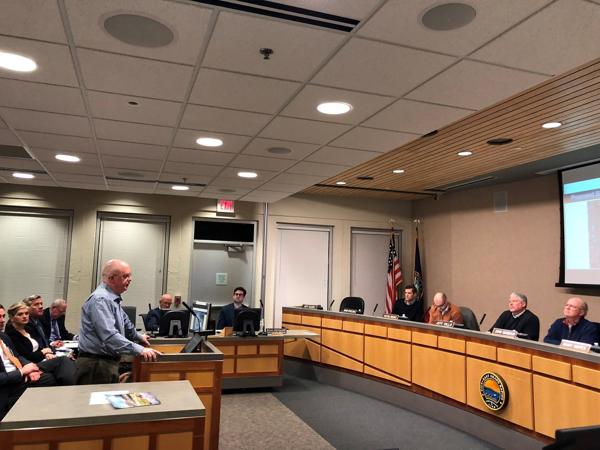 East Grand Rapids resident Randy Smith stands in front of the city's Planning Commission to comment on Spectrum Health's plans for their Blodgett Hospital campus, located at 1840 Wealthy St. SE. Smith was one of several residents to express concerns with the size of a planned parking structure and lack of communication with residents. (Madison Bennett | mbennet2@mlive.com)

East Grand Rapids residents came out in force Tuesday, Feb. 6, to voice their opposition to Spectrum Health's plans for the Blodgett Hospital campus.

The residents attended a special meeting of the East Grand Rapids Planning Commission held to discuss and review the plans, which are focused around wayfinding on campus, beautifying the main entrance and improving parking for patients, visitors and employees.

"This project is about much more than parking lots and parking ramps," said Julie Wolowitz, vice president of operations and executive in charge of Blodgett Hospital. "The project is really about making sure that Blodgett Hospital can meet the needs of our patients and community members now and in the future."

According to Wolowitz and Rick Redetzke, special vice president of facilities and real estate, Spectrum met with homeowners in the surrounding area on Jan. 16 to present their original plans and to get community feedback.

"We've already changed what we initially designed since that meeting and we're going to continue to listen to feedback," Redetzke said.

But despite those revisions, residents said they are still upset, specifically with the construction of the south parking ramp due to its size and lack of setback from the street.

"This thing (parking structure) will be mammoth, the clouds will be gone....it will just be this massive structure," said resident Jane Chobanian.

The south parking ramp was also a point of issue for Planning Commissioners and  Planner Paul LeBlanc, of PLB Planning Group, who the city has been working with on the plans.

LeBlanc attended Tuesday's meeting to introduce the plan and provide some guidance to the commission.

"The primary concern is the south parking structure; our planner has called it very imposing. It is very imposing," Planning Commission Chairman John Barbour said.

LeBlanc advised Spectrum officials to go back and take another look at their plans to see if there is anything they can further do to minimize the visual impact it will have on the neighborhood.

"The big comment in my memo relates to especially the south parking deck. The size, the mass, the scale of that, suggesting that they really go back and take a hard look at what can be done," LeBlanc said.

Other complaints from residents included what they said was a lack of communication between Spectrum Health and residents and potential damage to their homes from vibrations that construction could cause.

"I do not want you to leave here tonight thinking that the neighbors have had a voice in this," resident Dave Murkowski said. "We have had no voice in this, not at all."

Wolowitz said Spectrum takes the public comments "very seriously" and moving forward, wants to work with and listen to the community to integrate some of their concerns into their plan.

"We want this to be good for everybody involved," she said.

The next scheduled special meeting on Spectrum's plans is Tuesday, Feb. 20, at 5:30 p.m. in the commission chambers at the East Grand Rapids Community Center, 746 Lakeside Drive SE.

190
Write to the City now! Clicking on this tab will connect you to the City Commissioners